Community leaders have called for assurances over the long-term future of the only remaining bank in their town.

County councillor Graham Timms has contacted Barclays after it emerged the company wants to reduce opening hours in Llangollen to three days a week from July 24.

“We simply cannot lose this bank. I will be writing to Jonathan Brenchley, Barclays’ head of corporate relations in Wales, to try and get some answers,” said Cllr Timms.

Assembly Member Ken Skates has also contacted the company. He said: “Not only is Barclays the only bank in Llangollen, it’s the last remaining branch anywhere in Clwyd South following closures in Brymbo, Cefn Mawr, Chirk, Corwen, Rhos and Ruabon – as well as HSBC and NatWest in Llangollen – in the past few years.” 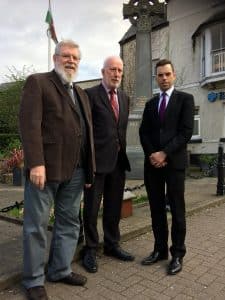 Last year Mr Skates asked for – and received – reassurances from Barclays that the Llangollen branch was safe ‘for the immediate future’. He also encouraged constituents to use the branch as often as they can to keep footfall up.

“In many people’s eyes, reducing opening hours is only a few steps away from closure, so I have asked Barclays for a further commitment to Llangollen,” said Cllr Timms.

“Only once in the past seven years or so has Barclays closed the last remaining bank in any town in Wales, so I hope they will continue to operate with a greater degree of social responsibility than other banks have shown to people in our area.”

Town councillor and former mayor Bob Lube added: “It would be a sad day for Llangollen if this branch closed, particularly after so many people switched when HSBC and NatWest shut.”

The changes will see the branch open on Monday, Tuesday and Friday from 10am-4pm.