Workers at the firm’s Rhostyllen headquarters in Ken Skates’ Clwyd South constituency have spoken of their concern at a possible takeover by Severn Trent Water, which is currently leading the bidding war with London investment firm Ancala.

First Minister Carwyn Jones said this week that he ‘would not support any change that would mean the loss of Welsh jobs’. 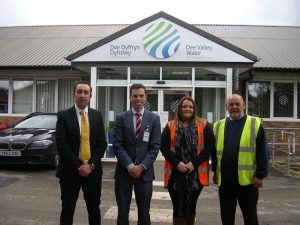 Mr Skates said: “I welcome the First Minister’s statement. The retention of jobs here is a red line for me, and my colleagues Susan Elan Jones MP and Ian Lucas MP have also visited the site several times recently to talk to worried staff.

“Severn Trent has not offered sufficient guarantees that the fantastic Dee Valley workforce – who are the reason this company is so well-regarded – will keep their jobs. There are also a lot of other local companies in the supply chain who could potentially be hit by this takeover.

“Ancala, on the other hand, has stated that Dee Valley’s operations and brand – the essence of the company – would be retained. Their bid is clearly and overwhelmingly the one endorsed by the dedicated workforce in Rhostyllen.”

Mr Skates this week put his name to a letter from the company opposing the Severn Trent takeover and asking the competition and markets authority to look at the bid.

Dee Valley Water employs about 180 people and has 230,000 customers across Wrexham and Chester.

The company’s average household bill is £126, compared to Severn Trent’s average of £174.

Mr Skates has previously said: “Dee Valley Water is an accredited Living Wage employer with deep roots in our area for more than 150 years. Severn Trent is neither.
“The evidence is clear: Dee Valley Water and its excellent local workforce is far better for customers, both in terms of the service they receive and the bills they pay.”