Sixth form students were given the chance to quiz their AM and MP during a question and answer session.

Ken Skates and Susan Elan Jones visited the Maelor School in Penley on Friday (October 26) to talk to politics students about issues ranging from homelessness and mental health to public transport in Wales and concern over Brexit. 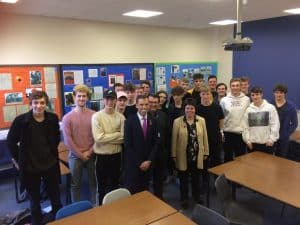 Clwyd South AM Mr Skates told the students: “I got into politics largely because of my experience of growing up in the 80s and 90s. I had a very strong feeling that too many young people ended up having their future prescribed, their destiny set for them, based on where they come from rather than how much hard work and graft they put into life.”

Ms Jones talked about her previous jobs working for charities before becoming MP in 2010.

Afterwards she said: “It was a really enjoyable afternoon and I’d like to thank the students for their excellent questions and their enthusiasm, as well as their warm welcome. We had a wide-ranging discussions and covered a number of important issues, both local and national.”

Both politicians back plans to reduce the voting age to 16 and said it was encouraging to see the students say they would vote now if they were allowed to.

Mr Skates added: “I love coming to the Maelor and it was great to be able to talk so candidly with another knowledgeable and engaged group of students. The more I talk to young people today, the more convinced I’m they deserve the right to vote on their futures.”

Mr Skates and Ms Jones also thanked head of history and politics, Rob Quinn, and headteacher Simon Ellis for their help in arranging the visit.