Drivers have been urged to help keep schoolchildren safe by listening to concerns over speeding – and not breaking the law.

“This has been going on for years and it’s something we’ve raised time and time again,” said Mr Skates, who previously met with the pupil-run school council to talk about what can be done. 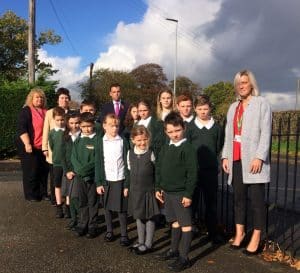 Wrexham Council subsequently reduced the limit outside the school from 30mph to 20mph and installed interactive signs, but community leaders believe more needs to be done.

He said: “It’s incredibly disheartening that drivers continue to ignore these speed restrictions. The children joined PCSOs recently to monitor speeds on the main road and talk to drivers who were going too fast, but sadly too many motorists are still acting as if the law doesn’t apply to them. Is saving a few seconds really worth endangering a child’s safety?”

Mr Skates said he has written to Wrexham Council and North Wales Police to ask for support.

MP Ms Jones was given a national award by road safety charity Brake in 2014 for her tireless campaigning to reduce accidents and deaths on Welsh roads.

She said: “If a vehicle hits a child at 20mph, there is a 95% chance that child will survive. For every mile per hour quicker you go, the chance that you will kill that child increases. At 40mph, which we regularly see people doing, there’s an 80% chance the child will die.”

Ms Jones added: “I will continue to do all I can to campaign for safer roads and tougher penalties for drivers who flout the law and put people’s lives at risk.”