Assembly Member Ken Skates spoke to passengers about the new Wales rail franchise during a campaign day at his local station.

The Clwyd South AM attended the event at Ruabon Station as part of Welsh Labour’s National Rail Campaign Day on Monday (September 3), which aimed to explain some of the benefits Wales’s new rail operator will bring when it takes over from Arriva next month. 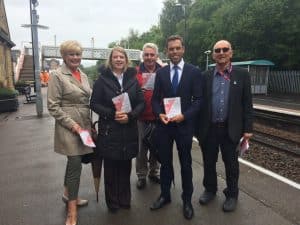 He said: “In the coming years, the Welsh Labour Government will deliver a ground-breaking transformation of transport across Wales. It’s extremely exciting and we had a great response from passengers at Ruabon Station, which will undergo a significant upgrade – along with Wrexham General and Chirk.”

KeolisAmey has been contracted to operate the Wales and Borders rail service for the next 15 years, taking over from Arriva Trains Wales in October. The company will work with Transport for Wales, the not-for-profit company set up to drive the Welsh Labour Government’s vision of a world-class, safe, integrated and affordable transport network.

– Investment of £2.4m at Wrexham General to enable the acceleration of the North East Wales Metro

She said: “Improving infrastructure and access at our railway stations is the responsibility of the Tory Government at Westminster, which is why I have repeatedly stood up in the House of Commons and called for investment locally. Last year I presented a petition collected by the wonderful Friends of Ruabon calling on the UK Government to act and support our cause.

“I’m delighted that the Welsh Labour Government is taking action and has set aside £15m to improve disability access at our stations. The Welsh Government has also promised to continue to lobby Westminster and put Ruabon forward for the funding it deserves.”