Campaigners have thanked the Welsh Government’s Health Secretary after ‘positive talks’ about a new facility for Cefn Mawr. 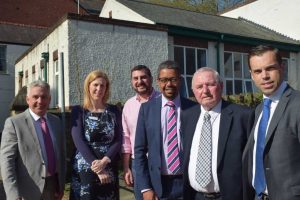 Clwyd South AM Mr Skates had previously organised a petition – signed by more than 2,000 people – which called on Betsi Cadwaladr University Health Board to bring forward plans for a brand new building ‘fit for the 21st century’ as soon as possible.

He said: “I know how many demands there are on the Cabinet Secretary’s diary, so I’m extremely grateful for him agreeing to visit Cefn Mawr. It was a productive morning. There is a huge amount of support for our campaign locally, and we will not give up.”

Cllr Wright said: “It was a productive meeting and positive talks took place regarding a new health centre. Further work is now required to see what the best way forward is.”

BCUHB funded urgent work to improve the current surgery in 2016 after agreeing it was ‘not adequate’ and said it would also develop a plan for more modern premises.