People with an interest in the outdoors and local history are being encouraged to take a walk around Ruabon.

Local Member of the Senedd Ken Skates was invited to take on the Ruabon Heritage Trail with the Friends of Ruabon (Thursday, August 19). 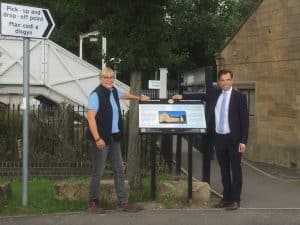 “This is a fantastic walk which takes in over 2000 years of fascinating local history,” said the Clwyd South MS. “I really enjoyed it and learned a lot about the area too.”

The idea to relaunch the trail came from Friends of Ruabon chair Jo Smith. Several new information points have already sprung up around the village detailing the history of local points of interest, and when completed there will be around 15 boards and plaques.

Jo said: “The trail is around 20 years but the old boards were showing their age. The Friends of Ruabon wanted to renew them and update their content. We also saw this as an opportunity to relaunch the trail and make more people aware of it locally.”

Mr Skates said: “The Friends are extremely grateful to Cllr David Bithell for helping get the first few new boards up recently. They’re really informative and also have QR codes linking to the World Heritage Site, which will soon be able to be accessed by mobile phones to give more information and help those with impaired vision.

“It’s also a very scenic walk which takes in parts of Ruabon people might not have seen before – I’d thoroughly recommend it. Maps will also be available soon.”

Jo said the idea ‘had been at the top of the wish list for Friends of Ruabon’ for some time. She also involved local residents of all ages, including those with local history knowledge and the technical wizardry to bring the project into the present day.

Jo added: “The trail starts from Ruabon Station, taking in the information board at the Bridge End Inn, passing the Round House, St Mary’s Church, The Wynnstay Arms, The Girls’ Grammar School, The Alms Houses, Pont Adam Cottages, Pont Adam (the bridge), Plas Newydd, the Old School Buildings of Ruabon Red Brick, Offa’s Dyke, The Ice House and the Fort.”

The trail will be officially re-opened at an event at Ysgol Rhiwabon on September 25.