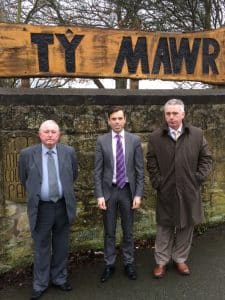 Clwyd South AM Ken Skates has previously called on Wrexham Council to install traffic-calming measures on Cae Gwilm Lane, the main spine road on the Ty Mawr estate. It is hoped the Welsh Government funding will soon see two flashing speed signs at either end of it.

Mr Skates said: “I’m pleased for the community that the Welsh Labour Government has taken decisive action to address long-standing concerns about speeding and safety in Cefn and surrounding areas. I know people have been asking Wrexham Council to help for years before this, so it’s great to see something is now being done.
“I would like to pay tribute to Cllr Wright, Cllr Bathers and the rest of Cefn Community Council for not letting this issue drop and for standing up for their communities. I would also like to thank Darren Green at WCBC for the help and advice he provided for the successful bid.”

Cllr Wright said: “We’ve been pushing to make our roads safer particularly in black spot areas such as around Ty Mawr, Queen Street, Bethania Road and Hampden Way for a long time. I’m delighted we’ve now secured the funding and have got the green light to move forward with our plans. It’s fantastic news.”
The funding will be administered via Wrexham to Cefn Community Council.

Chairman Ken Bathers said: “We believe this will make our streets much safer, particularly for children and the elderly. A consultation will start shortly and will need maximum participation from the community.”

Cllr Wright added: “I also think this funding will offer parents a safer environment to walk with their children to school. I welcome all the support we gained for this from all areas of our communities and would ask as many people as possible to take part in the public consultation to make their views known.”