Schoolchildren were praised by an AM after their commitment to online safety made them Wrexham’s star pupils. 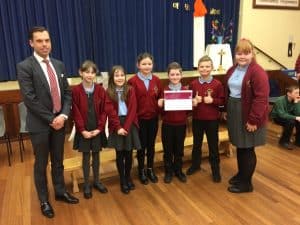 Henry Platten, who founded the award-winning company, said St Mary’s, Eyton Primary School and Ysgol Rhostyllen are among the first six eCadet Ambassador Schools in Wrexham for their commitment to online safety.

The event was organised to coincide with Safer Internet Day on February 6.

Mr Skates said: “Safer Internet Day is about educating young people and encouraging them to recognise that good habits start with them. We want them to be able to make the most of the many positive opportunities they can find online, but we also want children to have the knowledge and skills required to stay safe. That’s undoubtedly the most important thing. We want the internet to be a better and safer place for them.”

Mr Platten said: “We’re delighted by the positive impact our work is having in local schools. The eCadets at these schools have done amazing work in earning their school this coveted eCadet Centre of Excellence status for online safety and digital citizenship.”

The former police sergeant added: “Top tips for staying safe online include using a safe search engine designed for kids such as www.kiddle.com; if your child is under 13 and wants to use social media then make sure they use a safe kid-friendly platform like www.GoBubble.School and, lastly, always have a strong password. The best are four words written as one, for example something like PinkBathTreeDog.”

Safer Internet Day also marked the fifth anniversary of eCadets being launched. The company now supports schools across the UK and internationally.