Residents at their wit’s end want Wrexham Council to crack down on parking problems on a Cefn Mawr estate.

People living near Ty Mawr Country Park on Cae Gwilym Lane are fed up with motorists causing congestion and obstructions and fear someone could get hurt as a result.

Clwyd South AM Ken Skates has called for action after being contacted by constituents. 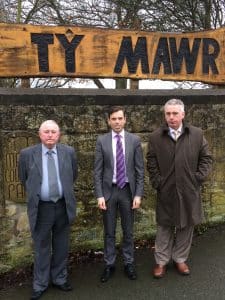 He said: “This has been a problem for a long time. The residents are sick of so many vehicles being shoehorned into a small, built-up area. They’re also worried from safety point of view because schoolchildren have to dodge in and out of the parked cars.”

Cllr Wright said: “We need something doing down there, it’s been getting worse recently. I am hopeful we’ll also see some action soon to tackle speeding.”

Cllr Wright and Mr Skates have previously called for traffic-calming measures to slow speeding drivers on Cae Gwilym Lane and support plans to introduce a 20mph limit on a number of busy neighbouring roads, including Queen Street and Hill Street.