CAMPAIGNERS have vowed to keep pressing for ‘the brand new health facility the community of Cefn Mawr deserves’.

Cllr Wright said: “A very positive meeting took place at Ty Mawr Country Park and it feels like we’re making real progress now. Another workshop will be held next month to agree what the facility needs to offer and then we’re looking at six to nine months to develop the business case. It’s all systems go.”

Clwyd South AM Ken Skates launched a petition calling for a new facility for the area which gathered around 2,000 signatures. Parliamentary candidate Susan Elan Jones and Ken Bathers, chairman of Cefn Community Council, have also been involved in the campaign. 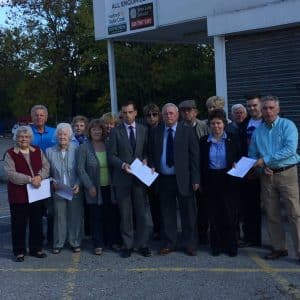 Mr Skates said: “Susan has been pressing hard for a new health centre for the people of Cefn, and it I’m delighted our pressure is beginning to pay off. The health board have listened to we’ve had to say and things are really progressing.”

Ms Jones, who is seeking re-election as Clwyd South MP, said: “This has been something we’ve fought for for a long time and I’m determined for the brand new health facility the community deserves to come to fruition as soon as possible.”

Cllr Bathers said: “Once the business case is developed and completed, the approval process would be expected to take another six to 12 months. As soon as we have that, we could have our new health centre within a year.”

He added: “This is an issue which has come up time and time again, and I’m thrilled things are now getting moving. I’d like to thank Ken and Susan for their determination and dedication to getting things to the stage where this is now very much a reality.”