Health service staff have been presented with a huge card to celebrate the 70th anniversary of the NHS. 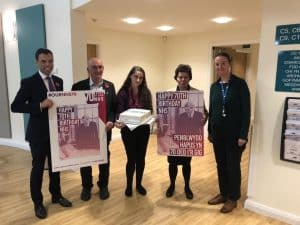 The card was signed by hundreds of local people after Clwyd South Labour Party volunteers decided they wanted to say thank you for the amazing work NHS staff do and set about collecting messages.

Ms Jones said: “We were delighted to present the card to Castle Health Centre in the 70th year since the NHS was founded in Wales by the Labour Party. The NHS is an institution that touches all of our lives and remains Labour’s proudest achievement.”

Mr Skates, who campaigned for the new facility in Chirk, said he was delighted to see the Welsh Labour Government focusing on protecting and investing in our NHS.

He added: “We were honoured to say a personal thank you, and I would also like to thank our Clwyd South CLP team who worked so hard on this.”

Cllr Hemmings said: “The 70th anniversary of the creation of the NHS is a landmark event and this was about saying thank you to the dedicated staff.”