Funding for a children’s park in a ‘forgotten’ part of Chirk has been welcomed after a long-running campaign.

Town councillor Frank Hemmings was thrilled after confirmation of a £5,000 grant for new play equipment at Black Park, which he says has been a long time coming. 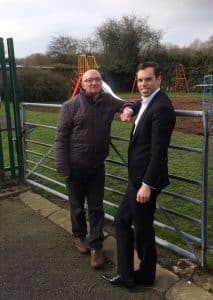 Cllr Hemmings said: “People have wanted new equipment for our play area for a long time and I’m delighted our efforts have paid off. It’s much-needed.
“Residents in Black Park often feel they’re forgotten by Wrexham Council, so I’m glad we kept fighting for this. I’d like to congratulate and thank the town council, particularly our clerk Shaun Jones, for working so hard to deliver this good news.”

Cllr Hemmings has also promised to look into concerns raised by residents about unsafe fencing around the play area after it was handed over from Wrexham Council to Chirk Town Council.

Clwyd South AM Ken Skates recently met local residents and town council clerk Mr Jones to discuss funding options for the play area.
He said: “This has been a long time coming. One of the main things which has cropped up when I’ve spoken with people in Black Park is the state of the play area and the need for some investment, so I’m delighted it’s finally come to fruition. Well done to Frank and the town council for their efforts.”