Clwyd South AM Ken Skates and MP Susan Elan Jones paid a visit to the Stiwt theatre in Rhosllannerchrugog and admired its newly-renovated clock tower.

The local landmark has been brought back to life thanks to extensive local fundraising and a grant of £50, 000 from Welsh Government historic environment agency CADW.

The iconic clock chimed for the first time in  more than a decade recently and work continues to restore the famous building to its former glory. 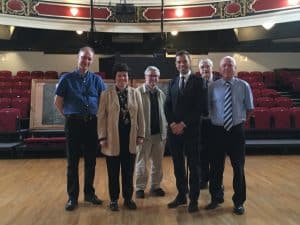 After visiting on Friday, Mr Skates said: “The Stiwt has been the beating heart of Rhos for almost 100 years, but the clock tower had been silent for more than a decade until last month. I’m proud that the Welsh Government has been able to help make this wonderful clock chime again.

“The Stiwt remains a building of huge historical significance in Rhos and I’m delighted that we have such a dedicated team of people working to raise funds and attract grants to continue its restoration.”

For three-quarters of a century the Hafod Colliery was the main employer in Rhos and the bells rung out to tell miners their shift was starting. The pit closed in 1968.

Ms Jones said: “My great-grandfather Ishmael Jones served on the first management committee of the Stiwt. Like so many other local coal miners, he worked at the Hafod Colliery and was committed to the provision of educational, cultural and social facilities for ordinary working-people from our area.

“Hafod Colliery closed in 1968 and it has been wonderful to see people coming together to restore the clock tower to mark the 50th anniversary. The Stiwt remains a remarkable facility and we are very fortunate to have it in our area.”

In addition to the Welsh Government grant, Wrexham Council also contributed more than £20,000 to the clock restoration project.

Stiwt manager Rhys Davies added: “We were happy to invite Ken and Susan to the Stiwt. Both have been very supportive over the years and hold regular surgeries here.

“Since the chimes were officially activated on May 10, we have been very encouraged with the response from the local community and further afield. Comments have been very positive and people are happy to hear the Stiwt bells chime once again.”

Mr Davies added: “The front of the building has seen major repairs to the stone and brickwork and is now ready to take on the elements for the coming years.

“The support from the local community, including the Co-op, the community council, Cyfeillion Stiwt Friends, CADW, Wrexham County Borough Council and – of course – the many individuals has been fantastic.

“We are now in the early stages of putting our next project together, which will to be to renovate the auditorium. Fundraising never really stops here. We are passionate and determined to get the Stiwt back to a very high standard inside and out.”