Politicians have held ‘constructive’ talks about emissions from the Kronospan factory in Chirk. 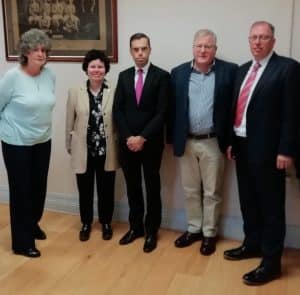 Mr Skates said: “I was pleased when Wrexham Council contacted me to arrange this meeting. I know Terry as the local member gets a lot of complaints as the council are currently responsible for monitoring emissions.

“It was a constructive meeting and Susan and I are pleased to be working alongside Terry and Jackie to address residents’ ongoing concerns.”

Ms Jones said: “We know this is a long-standing issue for some of our constituents so this was a welcome opportunity to discuss what the council and company are doing to mitigate their concerns. It’s vital we work together on issues like this which are important to local people, so I’m pleased Cllr Evans from Wrexham County Borough Council and town councillor Allen were able to attend.

“Ken and I have made numerous representations on behalf of our constituents in the Chirk area to Wrexham Council and the company itself over the past few years to convey residents’ concerns. Most people say they don’t want the factory closed as it’s one of our area’s biggest employers and closure would devastate hundreds of local families. However, I’m strongly of the view that more has to be done to deal with the very legitimate environmental concerns that local residents have.”

Natural Resources Wales (NRW) is set to take over sole responsibility for monitoring emissions from Kronospan next year.

Mr Skates said: “I know there continues to be some confusion and misinformation with regard to Kronospan, which is why the Welsh Government has issued a direction to ensure that the site has a single regulator in the future, which will be NRW.”

A recent letter to Mr Skates from Wrexham Council’s chief planning and regulatory officer, Lawrence Isted, confirmed that the authority is currently responsible for emissions to air, land and water, as well as noise.

Mr Isted said: “Upon receiving complaints on such matters, my officers would consider the likely source of the alleged pollutant and assess the controls implemented by the company against the requirement of the permit.

“Officers would also consider the effect of the pollutant on human health and the environment with reference to relevant environmental standards issued by the World Health Organisation and relevant air quality standards regulations. These standards are used to protect the health and wellbeing of the local population.”