Calls have been made for increased safety measures at a speeding hotspot in Wrexham. 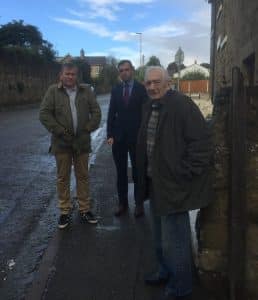 Member of the Senedd Ken Skates is backing residents of Heol Maelor in Coedpoeth who say the dangerous speeds hit by drivers every day are an accident waiting to happen.

Gerald Kidney and his neighbour Colin Heron contacted their local MS to enlist his support after reaching their wit’s end with motorists hammering past their homes, a short distance past the village’s fixed camera on the A525.

Mr Skates said: “It’s clear this is a problem that isn’t going away. All too often, vehicles accelerate down the hill towards the A483 as soon as they’ve passed the speed camera and are already travelling far in excess of the limit by the time they reach the 50mph area.

“In the short time I spent with Gerald and Colin we saw more than a few vehicles clearly going above the limit once they’d passed the camera and started heading down the hill.”

Retired Mr Kidney moved into his home a year ago and says he often feels his house shaking when heavy goods vehicles thunder past.

Mr Skates said: “Several years ago the camera on the outskirts of the village was recorded as catching the second highest number of speeders in North Wales, and it’s clear the issue hasn’t improved. I will be raising residents’ concerns with both North Wales Police and Wrexham Council and pushing for further safety measures on this stretch of road.”