A school’s drive to reduce its carbon footprint has been welcomed by the local Member of the Senedd.

Clwyd South MS Ken Skates visited Ysgol Dinas Bran in Llangollen during its Great Big Green Week and was impressed by the eco-friendly measures being taken.

“Dinas Bran has Eco-Schools Platinum status, and sustainability has been at the forefront of students’ work over a number of years,” said Mr Skates.

“Wales is becoming a cleaner, greener country thanks to a range of steps being taken at national level, and it’s really encouraging to see young people in Clwyd South embracing change and showing so much enthusiasm for the environment and sustainability.”

The green project at Ysgol Dinas Bran and Llangollen Leisure Centre has seen solar panels installed on the school roof which will generate electricity onsite. Combined with other measures including heating control upgrades and LED lighting is expected to reduce the school’s carbon emissions by 73 tonnes a year. 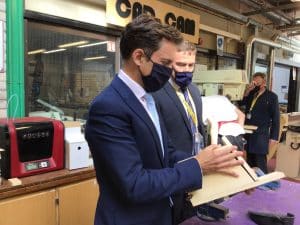 Mr Skates added: “I really enjoyed visiting the school again – this is such a fantastic initiative. Wales is at the forefront of environmental change in the UK and was the first to declare a Climate Emergency in 2019, and I’m thrilled that our drive as a nation has really caught the imagination of our young people.”

In recent years the Welsh Government has banned fracking, introduced strict regulations to reduce farming pollution and cut greenhouse gases and become the third best country in the world for recycling.

Mr Skates said: “We want to be number one and the Welsh Government wants us to become a zero-waste, carbon net-zero nation by 2050 at the latest. Projects like this and the passion being shown by the students are certainly a huge step in the right direction.”

The Welsh Government has also said more single-use plastics will be banned during the current Senedd term, with firms also incentivised to reduce their waste.