Member of the Senedd Ken Skates has thanked the Welsh Government for helping get Llangollen Railway back on track.

The comments came after a recent visit to the popular tourist attraction by Deputy Minister Dawn Bowden and the news that further major funding from the Welsh Government had been confirmed.

Mr Skates, MS for Clwyd South, said: “Llangollen Railway is of huge importance locally and attracts visitors from far and wide. It has had unparalleled support from the Welsh Labour Government over the years and I’m delighted and proud that they have once again stepped in with crucial funding.

“The Trust was given a grant of £147,860 last year and I know there was a lot of clamour locally for even more funding when the railway ran into problems earlier this year.” 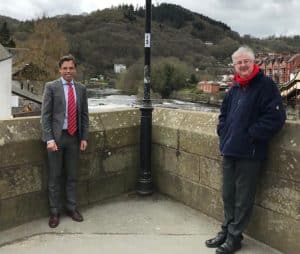 Mr Skates added: “Prior to the Senedd elections in May, while visiting Llangollen, First Minister Mark Drakeford said the Welsh Government would work with local people to help get the railway back up and running if re-elected, so I had every confidence that would be borne out. I would like to thank the First Minister and the Deputy Minister Dawn Bowden for delivering for Llangollen.”

Shortly after the election, Mr Skates made formal representations to the Welsh Government calling for more funding for Llangollen Railway. Last month, it was announced a further £143,290 grant had been rubber-stamped to help with running services and restarting operations – taking the financial package to more than £291,000 in the last 12 months alone.

In the Deputy Minister’s response to Mr Skates, she said: “Thank you for your letter of May 24 regarding support for the Llangollen Railway. Like you, I recognise the important role of the Llangollen Railway as a key tourist attraction and as a precious piece of regional heritage. I was lucky enough to visit the railway last month when I visited north Wales.

“Last year the Llangollen Railway Trust received a grant of £147,860 from the first round of the Cultural Recovery Fund to support its operations. In the months following the sad announcement that the PLC arm had been placed into administration, officials in Cadw and Visit Wales have maintained contact with the Trustees, receiving updates regarding the progress of their plans to retake full control of the railway and restart operations.

“On the advice of my officials, the Trustees submitted a request to Welsh Government for support from the second round of the Cultural Recovery Fund. I am pleased to say that having received confirmation from the Trust regarding their progress towards restructuring and restarting operations, we were recently able to issue a grant offer to Llangollen Railway Trust Ltd of £143,290.

“This money will help the Trust to restart and operate trains during the summer and to help them get themselves on a sound financial footing to manage through the winter. I commend the Board of Trustees for continuing to work so hard to stabilise the organisation and wish them luck with their efforts to restart operations and secure the future of the railway.”