Plans to improve mobile phone coverage in the Ceiriog Valley have been welcomed by the area’s Assembly Member and MP.

Ken Skates and Susan Elan Jones have made repeated representations to mobile operators and the UK Government over the years in a bid to boost reception in the area, culminating in a petition signed by more than 1,000 people. 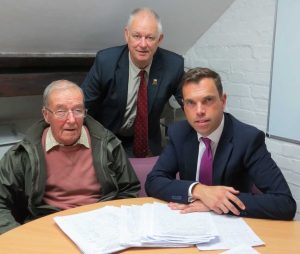 Mr Skates met with local councillor Trevor Bates and resident Mike Rutt, who organised the petition, in November, with the AM saying: “It is essential that residents and visitors to the Ceiriog Valley have mobile reception. I applaud the way Mike has gathered such a strong petition to urge UK Government to ensure there is better mobile connectivity.”

An email sent to Cllr Bates by BT last week said: “In order to deliver the coverage needed for the emergency services, EE is deploying hundreds of additional sites across rural Wales, England and Scotland. The coverage provided by these sites will also be available to our commercial customers.

“In addition to these sites, the Home Office is also building nearly 300 further masts, many in Wales, to provide ‘Extended Area Services’ (EAS) coverage. It is currently planned that the Llanarmon Dyffrn Ceiriog area will be served by an EAS site. EE will put its equipment on these sites and will deliver commercial coverage as well as a blue lights service, subject to the site providing the necessary capacity to provide a good quality experience to our customers.”

Mr Skates said: “I have made numerous representations to the UK Government on this issue on behalf of my constituents in the Ceiriog Valley, which – like many parts of Clwyd South – continues to suffer from weak, intermittent and, in some cases, completely non-existent mobile phone coverage.
“I am extremely keen to ensure these plans materialise and have written to the Home Office to ask for more detail and timescales. People have waited far too long already and we need a firm commitment that action will be taken.”

Ms Jones said: “In addition to the problems poor mobile coverage causes on a daily basis for residents and visitors to the area, as well as local businesses, my constituents feel the issue could have far more serious consequences should there be another incident like there was recently when a local man suffered a serious fall, breaking several ribs.

“Rescuers had to drive some distance before a mobile signal was available to phone 999 and residents rallied to get two-way radio sets to relay the patient’s condition to the emergency services while he passed in and out of consciousness. The incident happened around a mile from Llanarmon Dyffryn Ceiriog and police had to run to the Hand Hotel in the village to call the Air Ambulance. Fortunately, the gentleman is now recovering.”

The incident spurred Mr Rutt and Cllr Bates into action and they subsequently collected a petition of 1,039 names urging the UK Government to act.