Community leaders have called on the UK Government to finally back the long-running campaign for lifts at Ruabon Station.

Member of the Senedd Ken Skates was notified this week that Network Rail will nominate the Ruabon project for the next round of the UK Government’s Access for All programme, and was quick to declare his support.

But the final say will come down to the UK Government, which has already stopped the project in its tracks twice by refusing to match the Welsh Government’s capital investment.

The local MS and Ruabon councillor Dana Davies have worked alongside the Friends of Ruabon to campaign for improved access at the station. The Welsh Government wants lifts installed to help people with mobility issues, families with young children and commuters carrying heavy luggage move between platforms, but the UK Government had twice refused to contribute to the costs even though the work comes under Westminster’s remit.

Welsh Ministers have asked the UK Department for Transport to urgently prioritise work at Ruabon – with First Minister Mark Drakeford a keen supporter of the plans. 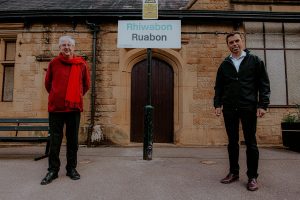 Clwyd South MS Mr Skates said: “It has been well documented that the Welsh Labour Government has twice before put money on the table for this long-awaited work to go ahead, even though it’s not a devolved area, and I know the Friends of Ruabon – and many other local people – have been extremely frustrated by the slow progress and false dawns.

“I have submitted a letter of support to Network Rail and I’m 100% behind this. The Friends of Ruabon and local campaigners can’t do any more, and the Welsh Government can’t do any more. The First Minister has even asked the UK Department for Transport to prioritise this work. We’ve done all we can – now it’s over the UK Government.”

Cllr Davies said: “Some years ago when the Welsh Government first committed to funding half of the project, we celebrated – we thought it was a done deal! We didn’t think there was any way the UK Government would refuse to fund half the cost of such an important project, particularly one it should be paying for in full.”

While transport is devolved to Wales, responsibility for track, station infrastructure and signalling remains with the UK Government. Over the past 20 years, Wales has received less than 2% of the £100bn+ that that UK Government has spent on rail enhancement – despite having 5% of the population and 11% of the track miles. 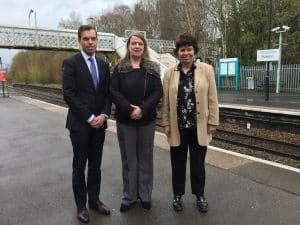 In 2017, former Clwyd South MP Susan Elan Jones presented a petition to Parliament on behalf of the Friends of Ruabon calling for action from the UK Government. And in an attempt to incentivise the UK Government to invest in Welsh stations, including Ruabon, the Welsh Government had offered to match-fund vital upgrades. But the UK Government had twice decided against funding for Ruabon, most recently in February 2020.

A factual briefing requested by Mr Skates from the Welsh Government stated: “Welsh Government, following detailed discussions with the rail industry on investment priorities, has twice submitted Ruabon Station as a priority nomination for UK Government investment in step-free access under the non-devolved Access for All programme.

“The first was a request for a new replacement bridge with lifts, the second for a reduced cost alternative whereby lifts could be fitted to the existing structure. On both occasions, the strong case made for Ruabon was not accepted by the UK Government.”