Assembly Member Ken Skates visited a nursery to hear about the difference a new Welsh Government scheme is making to parents. 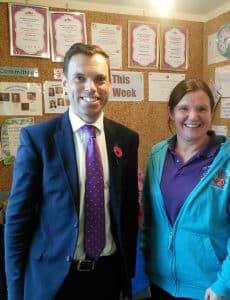 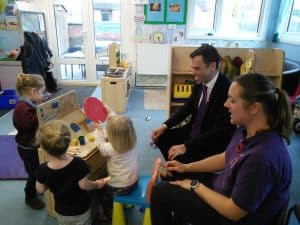 Childcare providers in Bronington, Brymbo, Coedpoeth, New Broughton, Overton and Ponciau are among those in Wrexham to have benefited from the programme since September. It provides 30 hours of early education and childcare to working parents of children aged three and four for 48 weeks of the year – the most generous childcare package anywhere in the UK.

The offer was a key pledge in Welsh Labour’s manifesto, written by Mr Skates, ahead of the 2016 Assembly election. Rachel Harris, manager of Overton Playcentre, said it is already helping local families. She said: “A number of our parents have described the offer as life-changing!”

Mr Skates said: “This childcare offer is making a real difference to parents in Clwyd South, reducing the strain on family income and helping ensure childcare is not a barrier to them taking up employment or increasing their hours. I also want to hear from parents first-hand, to hear their experiences and the difference it is making to them.”

Overton Playcentre is a parent-led charity which has been running for 50 years and currently relies on volunteers to raise nearly £7,000 a year to cover running costs. It was recently awarded £8,200 in National Lottery Awards for All funding to develop an outdoor learning area.

Rachel said: “We are absolutely thrilled to have received this grant. It is lovely to have much to celebrate this year following on from our pleasing Estyn inspection earlier in the year. We may be small but we have a big vision for the future!”